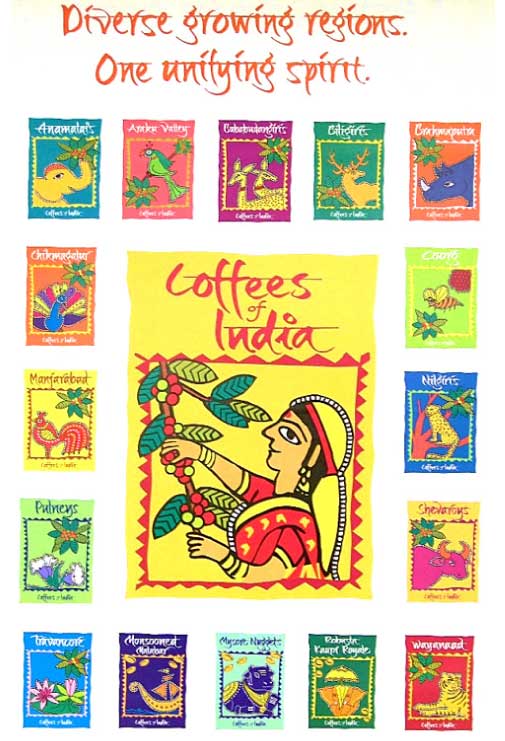 Coffee is world's most favourite beverage with 2.5 billion cups consumed every day. Coffee is produced in about 70 countries most of them belonging to the developing world from Africa, Latin America and Asia. In contrast, coffee is mostly consumed in developed world in America and Europe, thus making it the world's highest traded commodity after petroleum. This beloved drink is categorized into two varieties namely Robusta and Arabica.

Brazil is the largest producer of coffee accounting for approximately 25% of the total world produce. This makes the price of coffee, sensitive to weather conditions in Brazil. In recent years, coffee has also become one of Vietnam's key agricultural export products, India is the sixth largest producer of coffee in the world, accounting for about 5% of world coffee production followed by Indonesia. As a result, Asia has become a key coffee producing region.

The area under coffee plantations in India has increased by more than three times over the last 50 years. With the bulk of all production in India taking place in its Southern states. However Coffee plantation in Karnataka is characterized by predominant 70% of small holders possessing five hectares of land and below.

India, like many other Asian and African countries is primarily a tea drinking nation. As a result, almost 80% of Indian Coffee is exported contributing to a major share of inflow of US Dollars to the Indian exchequer. Things are however changing rapidly. Asian markets like Vietnam, Indonesia, China, Korea, Thailand and India are finding significant traction in the domestic market as well where coffee consumption is growing fast anywhere between 6% to 15% as against world's average of under 2% growth YoY.

This has led to the setting up of a number of international and Indian coffee retail chains in the country in recent years. Apart from this, a number of homegrown entrepreneurs are emerging to help spread the coffee culture and transform the entire coffee experience in homes through provision of freshly roasted coffee beans, a range of distinguished varieties of coffee as well as coffee brewing equipment.

All in all, global coffee industry is looking up to Asia and particularly India as the next growth drivers for the coffee Industry and on this backdrop, World Coffee Conference & Expo of International Coffee Organisation in India in the year 2020 assumes special significance.

☕  Karnataka
Chikmagalur, Kodagu and Hassan districts of Karnataka are major coffee producer regions of the state. Karnataka is the largest coffee growing State producing 71% of Indian coffee. The noteworthy feature of the coffee production in Karnataka is its fine shade grown coffee cultivated under rain forest.

Chikmagalur is first place in India where coffee was introduced, It is also known as coffee land of Karnataka. Chikmagalur is one of the famous hill stations in Karnataka state, located in the foothills of Mullayanagiri range.Its geography and climate makes it one of the largest coffee estates in Karnataka followed by Kodagu, and Hassan. Mullayanagiri is the highest peak of Karnataka situated in the Baba Budan Giri Range of the Western Ghats and tallest peak between the Himalayas and the Nilgiris

☕  Kerala
The malabar region of Kerala produce Arabica and Robusta coffee beans. Around the hills of Wayanad district near Kalpetta.

Wayanad: The green paradise of Malabar region,Wyanad is located between the mountains of the majestic Western Ghats. Wayanad is the one of the best hill station of Kerala followed by Munnar, Nalliyampathy and Rajamala. The beautiful hill region is surrounded by ever green forest, Pookkode Lake and Karapuzha Dam near by, Its pleasant climate is best for coffee and tea cultivation so also known as Coffee County of Kerala.

Major variety of coffee cultivated in this region are Rubusta and Arabica. Malabar region is known for its beautiful hill, green valleys and cool climate which makes its one of the best place for flora and fauna..

Yercaud: The small and young hill station of Tamil Nadu is located in the Salem District.Yercaud is situated in the Shevaroys range of hills in the Eastern Ghats and got its name due to forest near the lake mean to Lake Forest. Cool climate and silent valley of Yercaud known as the best coffee forests in India. Nilgiris District, Coonoor and Kodaikanal are other place in Tamil Nadu which are known for coffee plantation in India.

☕  Andhra Pradesh
Araku Valley Hill station near Visakhapatnam district is the coffee plantation area in Andhra Pradesh. The valley of the Eastern Ghats is located on the Kothavalasa Kirandul railway line.

Araku: Araku is a hill station in Visakhapatnam district of Andhra Pradesh, in the Eastern Ghats of India inhabited by different types of tribes. Coffee Plantation in Araku is known for its first tribal growers' organic coffee brand. Coffee cultivation industry is secondary here, as pepper and rubber are cultivated by the tribal all around the state.

The amazing Araku valley is surrounded by Galikonda, Raktakonda, Sunkarimetta and Chitamogondi mountains and Anantagiri and Sunkarimetta Reserved Forest. Other coffee producer regions of Andhra Pradesh are Chintapalli, Paderu and Maredumilli in the Eastern Ghats of India. The area from Visakhapatnam to East Godavari districts are also known for coffee plantation in the state.

Daringbadi: Daringbadi is known as Kashmir of Orissa,located in the hill region of Orissa and the only hill station of state. Daringbadi is one of the youngest coffee plantation region in India followed by Chintapalli, Himachal Pradesh and Assam. This beautiful region is gifted with dense pine jungles, long coffee gardens,majestic Mountain and amazing valleys. Daringbadi offers cool climate, landscape beauty, deep dense forest, Tribal people and pleasant environment, still unexplored and untouched. Koraput district in Orissa is another place known for most traded commodities, the rich coffee plantation.

☕  Tripura
Tripura is one of the largest producer of coffee in North East India along with rubber and tea gardens. The state is an alternative plantation region of coffee and rubber in India.

☕  Nagaland
Nagaland is the second largest coffee producing states in the North East and a favourable land for coffee farming in India.

☕  Assam
Assam is best known for tea gardens but there are few places in the state where coffee are grown too. Monsoon places of Assam are idea place for monsoon varieties of coffee.

☕  Meghalaya
The rollicking hills and cascading waterfalls of Meghalaya are the best coffee grown regions. East Khasi Hills dotted with coffee plants and a serious business in Meghalaya.

☕  Mizoram
Mid hill ranges of Mizoram are best place for coffee plantation the crop is practically introduced in the state. Mizoram is home to list of endemic species of birds and wildlife such as Phayre's leaf monkey and Capped langur.

☕  Manipur
Districts of Manipur are now taking drives for coffee plantation, geography of Manipur is best suited for coffee beans both Arabica and Robusta.

☕  Maharashtra:
Chikhaldara hill station of Maharashtra is the only coffee growing area in Maharashtra and the sole hill resort in the Vidarbha region is at an altitude of 1118 m.